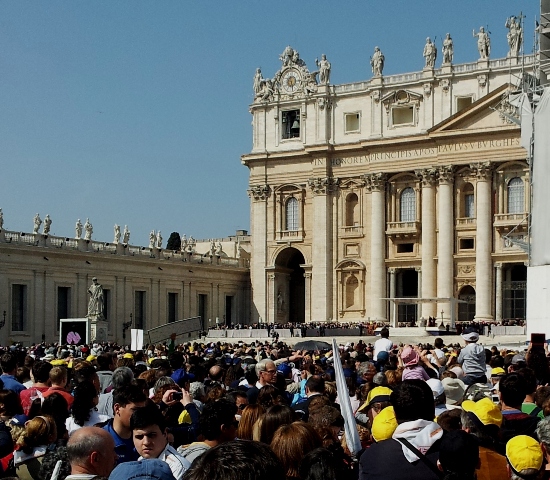 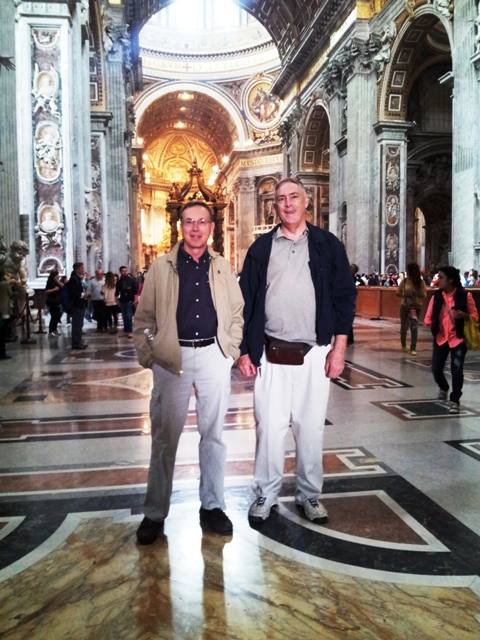 When we arrived in Italy, the new term of Pope Francis was in full session, to a delighted cheering crowd of about 50,000 in Saint Peter’s square.  We stumbled onto his open air session (which occurs mostly on Wednesdays during the summer) so we joined the huge crowd of admirers to watch the papal audience on giant big screen outdoor TV’s!  You can see the Pope under the little white tent, but he comes across better on the 50’ square LCD televisions located throughout the square.  The only thing musical about this might be the angels all around, in every corner and nook, but interesting none the less!

Your intrepid Mills Novelty staff is shown here looking for musical treats inside Saint Peter’s. We didn’t find any, but they sure do have a lot of other great stuff!  Likely they have mechanical music tucked away somewhere, but where?

They say "when in Rome do as the Romans do!"  So we did…   Here’s George on the famous Spanish steps, along with a few thousand other tourists.  If they were all looking for mechanical music, this explains why we didn’t find a single music box here!  Oh well, a visit to the eternal city is always worth the trouble if you are in the neighborhood.  We completely enjoyed it before we got down to the serious business of finding MUSICAL TREASURES for you! 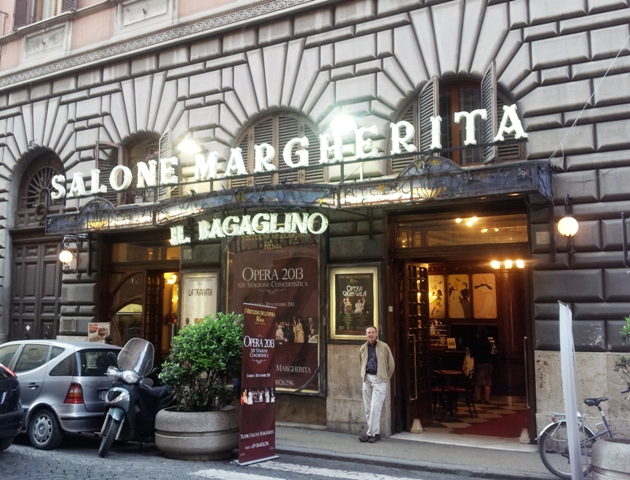 After a day of endless Catholic churches, we needed to stop for lunch, so a trip to Salone Margerita, complete with its mind blowing 1920 Art Deco façade and tons of deco Daum light fixtures, and Mocha posters was just right!  A real Art Deco Italian jewel!

Next it is back to the business of relentless search to find you the best musical instruments in the world!  For this we moved to Florence, truly a wonder in its own right. We found this nice old carousel which entertained the young at heart just off the main cathedral square.  It had a nice organ, playing briskly, but they didn’t seem to want to sell it (we couldn’t even find the owner), so we moved on…

By now, you say “what’s this got to do with mechanical music machines?”---nothing really --- but we were having a good time so we decided to visit that Pisa outfit with the tower problems! From all accounts, this tower will fall down, but the real question is when? It’s only a 20 minute train ride from Florence, and we were in the neighborhood, right!  I also found this button on my cell phone that allows great panoramic photos, wow, what they won’t think of next!  But churches with falling down towers and very few music machines is not what we came for, so it was time to move on to Venice!

These bronze horses atop Saint
Marks Cathedral are really big!

Bingo!   We finally scored with the real reason we visited Italy in the first place, about TWO HUNDRED mechanical music machines, barrel pianos, and two Hupfeld Phonolizsts!  We had been inquiring about this collection for many years since the original collector’s death. But to our surprise, even though the collection still exists, it turns out that our quest has had a change of ownership! Now it’s the Italian government and they moved everything into storage “for future use”.

Ever seen the Raiders of the Lost Ark movie, last scene where the ark crate is moved to a government warehouse with thousands of similar crates? It appears that this is exactly what the Italian government has in mind, likely this collection will never be on public display or see the light of day again---a pity. But now we have given the collector that is a “picker” at heart, and the ten percent plus music peddlers the information.   Go and try to buy it if you can…

Next our train took us to Luzern, Switzerland where we found an original photo, do you know who he is?   His name was Tino Rossi, a popular entertainer from Paris who was very famous during the golden age of mechanical music. In fact the Accordion Boy automatic roll playing orchestrion was created with the likeness of Tino playing accordion, and they also made a version called the “double Tino” which has two figures (a black drummer, and Tino).   These are all rare and very collectible today, we took this photo of a single Tino machine that still resides in Switzerland.

We visited the collection of Michael Funk in the Luzern area, where we saw this very nice Weber with pipes and also a Hupfeld Model A Phonolizst Violana.  Both are for sale, call us for details at 715-424-5183.

Next it was on to the great collection of Kurt and Ursula Matter, which started at Kurt’s business  Spymag AG (complete with a number of nice organs and music machines) and then on to their lovely home in Interlaken and world class collections.

o trip is complete without visiting our friends in Saint Croix, Switzerland. On this trip we were fortunate to get a private tour of Arlie and Michael’s museum collection. 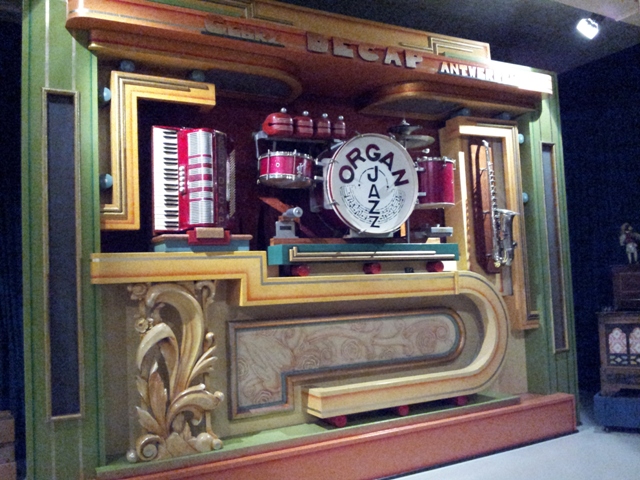 We also had a behind these scene tour of Michael’s music box restoration shop.  They are now pinning new music box cylinders via computer controlled via MIDI! 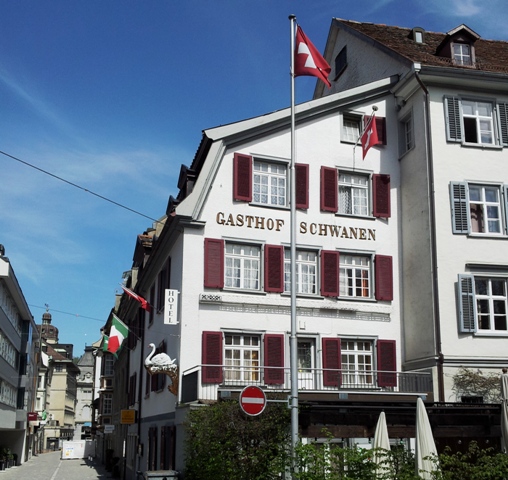 We hope you enjoyed our brief 2013 tour of European Mechanical Music. We have found many additional items that are currently being offered for sale. If you are looking for something special, please give us a call at 715-424-5183, perhaps we can help you obtain it directly from Europe. 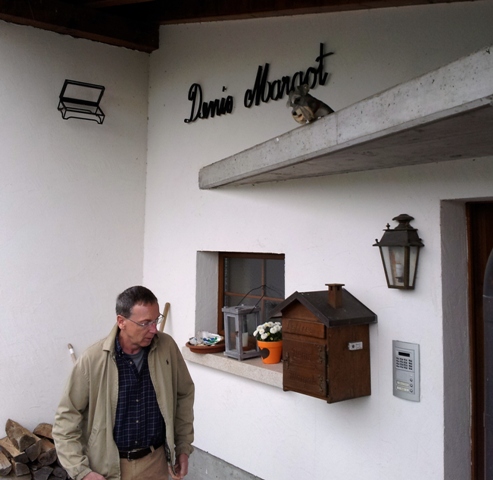