The Milhous Collection Fetches over $38 Million at Auction

Fifty years agao, brothers Bob and Paul Milhous began putting together their collection, Paul specializing in mechanical music machines and Bob in rare cars.  Over the years they also added other types of items including vintage firearms and signs, slot machines, stained glass, chandeliers, paintings and statues, models, clocks, aircraft, a 1910 peanut and popcorn machine that was pulled by two horses, and a “46-foot custom carousel with 42 animals, two chariots and a Wurlitzer 153 band organ,” as described in the catalog from RM Auctions.  "The items have been hand-picked from around the world, with an emphasis on the rarest and most desirable examples produced by some of the industry's most prominent names" according to the RM Auction catalog.

The entire collection was sold on Friday and Saturday, February 24-25, 2012 in Boca Raton, Fla. presided over by RM Auctions in association with Sotheby's.  Since the mid-90's it has been housed in a 39,500 square foot building in Boca Raton, and although not open to the public, the collection has been host to hundreds of charity events over the past several years raising millions for a wide variety of causes.

The carousel, the largest of the items, was unique since it is not an antique piece but was commissioned by the Milhous brothers.  According to Bob Brown, Collection Curator, the Milhouses searched all over the world for a carousel that meet their standards and when they could not find one, they commissioned this one to be built.  The construction took over four years and all 42 animals were hand carved based on original, historically correct designs.  It sold for just over $1.2 million, in line with the auction house’s expectations.

However, it was a, 1912 Oldsmobile Limited five-seat touring car, that took top dollar.  It is the only know surviving 1912 Olds Limited and sold for $3.3 million, more than double the pre-auction estimate. 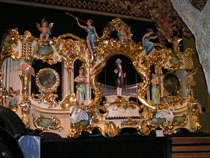 And the largest Gaudin organ known to exist, a gorgeous 125-key dance organ, went for just over $1.1 million.

The auction was well attended by both experienced collectors and those just starting out and the successful bidders went home with with some of the most exquisite and rare items in the world to add to their collections.