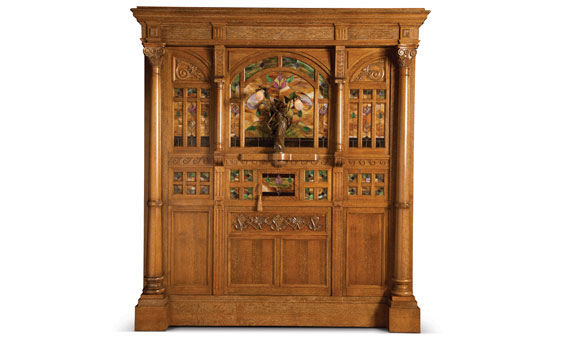 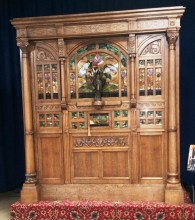 The offered Wurlitzer Concert PianOrchestra Style 32-A is the only example of this model known to exist today. Related Style 32 (not 32-A) orchestrions are in the J.B. Nethercutt San Sylmar Collection and in the Gilson Collection, the last from Disneyland where it had been an attraction in the Crystal Arcade on Main Street since 1955.

Of the many types of automatic instruments made or sold by Wurlitzer, the Concert PianOrchestra was the largest and most costly. Wurlitzer imported some complete PianOrchestras from J.D. Philipps of Frankfurt, Germany and imported others without cabinets, drums, wiring and coin mechanism, adding these parts in North Tonawanda. This 32-A is one of the latter varieties, imported circa 1912-1914, with a Wurlitzer cabinet, art glass and the like. Its first known location was in the Crystal Palace, a saloon and hotel on West Chestnut Street in Leadville, Colorado, conducted by Johnny Bernat who purchased it from Wurlitzer distributor Knight-Campbell in Denver in 1923. It remained there until its purchase by a collector in Wichita, Kansas circa 1953. It was acquired by Q. David Bowers for his personal collection circa 1965 but never restored. He sold it to Jerry Cohen circa 1976, for whom it was restored to perfection. It was a star attraction of the Cohen Collection until 1980, when it suffered damage from a fire in the Cohen music building. The Milhous brothers then acquired it and commissioned the complete restoration of the internal mechanisms and cabinet, using original and reconstructed parts. Damaged parts were remade exactly like the originals, resulting in the instrument once again coming to life musically and visually when Mike Argain of Fresno, California completed the full restoration in 1996.

Instrumentation includes piano, approximately 314 pipes in six treble ranks and four bass ranks, orchestra bells, xylophone, drums, tap cymbal, crash cymbal, tambourine, triangle and castanets, playing from a Philipps six-roll automatic changer. The Philipps work no. 1385 is stamped on the piano harp, and the date 16.9.11 (September 16, 1911) is cast into the harp. One of only three Concert PianOrchestras, it is now in beautiful playing condition. 7.92 ftx8.75 ftx5.58 ft inches.